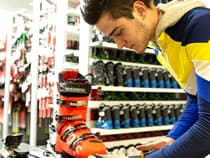 The Primiero Valley, also called Valle del Cismon, is situated in the eastern part of South Tyrol – Trentino, in the heart of the Dolomites. The valley is home to the six municipalities Mezzano, Siròr, Imèr, Tonadico, Transacqua and Fiera di Primiero surrounded by the Lagorai mountain range in the west, the Feltrine peak in the south and the Pala Group in the north. In San Martino di Castrozza in the Dolomites 60 km of slopes for skiers and snowboarders are offered. They are located from Alpe Tognole via Malga Ces to Val Cigolera and in Cima Tognola and in Punta Ces. The 23 ski lifts transport you to the perfectly groomed slopes at an altitude of 2,350 m above sea level. In addition to a wonderful view, snow is guaranteed at this altitude. Explore the nature park Paneveggion Pale de San Martino where you can slide on the 30 km of cross-country trails through the region. Besides cross-country skiers and skiers, also freestylers can enjoy themselves in the region Valle di Primiero. The funparks Rolle-Railz-Parks, San Martino-Snowpark and the Colverde-Snowpark offer a wide range of obstacles with rails, jumps, boxes, rainbows, halfpipes and ski cross.