Hide map
Welcome in Pejo! At SNOWELL you can rent your skis, snowboards, boots and fun sports gear for your skiing holiday in Pejo in Val di Sole in the ski resort Pejo 3000 easily and quickly online. Choose one of the following ski hire shops in Pejo, click on BOOK NOW and choose the period you would like to rent your ski equipment in Pejo . 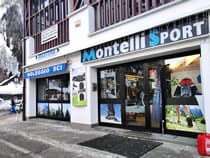 About the ski resort Pejo

Ski hire Pejo online - Pejo or Peio is located in the eponymous Pejo valley in the Val di Sole. The municipality of Pejo includes their districts Pejo village, Pejo Fonti, Cogolo di Pejo, Celentino, Celledizzo and Strombiano. In winter as well as in summer, Pejo, as the highest village in Trentino, offers numerous possibilities. Pejo is also located in the beautiful Stelvio National Park, which is ideal for touring and hiking with its surrounding mountains. As a holiday resort Pejo has a centuries-long tradition, as Pejo is also a spa town since 1650 and is known for its thermal water and its spa and wellness treatments. In winter the ski area of Pejo 3000 offers snow guarantee up to 3,000m above sea level. 20km of ski slopes await skiers and snowboarders. On the funslope of the Beverina slope freestylers can let off steam and try their tricks and jumps. In the family park Family Fun the children can expect fun and games in the snow. On the Val della Mite - Peio Fonti, skiers and snowboarders can enjoy the longest descent in the ski resort Pejo 3000. This run is 8km long and has a height difference of 1,600m. In nearby Cogolo di Pejo, the little skiers and snowboarders will find the Biancaneve Snowpark. This is also very suitable for adults who want to have their first experiences in the snow on skis or snowboards. There is a simple practice slope with ski school, lift, ski rental and also a tubing track. Twice a week the Biancaneve Snowpark invites guests for night skiing under the stars and floodlights. This should not be missed. If you would like to get to know other ski resorts in the Val di Sole, such as Marilleva, Folgarida and Madonna di Campiglio-Pinzolo, you can easily reach them with the ski bus Val di Sole.

Tip - ski hire Pejo
Using SNOWELL you can rent your skis and snowboards online in advance in Pejo and save money at the same time. At the time of your arrival you can pick up your booked rental equipment directly at the co-operating ski hire shop directly in Pejo. An extremely practical but also economical solution for your ski hire in Pejo.