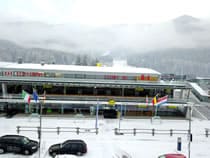 About the ski resort Bruneck/Reischach

Ski hire Bruneck Reischach online - Bruneck – Reischach is located in South Tyrol, in the midst of the Puster Valley. The ski area is the famous Kronplatz (Plan de Corones) at an altitude of more than 2,200 m. The area is very snow sure, but just to be on the safe side modern snowmaking equipment has been installed on site. If it should nevertheless lack of snow, than all the slopes, without any exception can be snowed. More than 116 km of wonderfully groomed slopes are offered, which inspires all skiers and snowboarders, because there is something for all skill levels in Bruneck – Reischach and on the Kronplatz (Plan de Corones). 31 advanced lifts and cable cars take the winter vacationers up where the winter fun can finally start. The beginners will be more likely to orientate themselves in the direction of the Geiselberg, because there are mainly blue runs. The professionals will rather choose the route in the direction of Reischach, because there they also have to conquer also two black runs to reach the village. At the mountain station Kronplatz (Plan de Corones), but also in the valley near Bruneck – Reischach, the tiny little skiers are accommodated. It is the place where the best trained instructors take care of the youngest guests and teach them the art of skiing. The aim is to arouse enthusiasm and fun and also hold on to it, so it never gets boring. Furthermore, there is a Skimovie run on the Kronplatz (Plan de Corones) where one has the opportunity to register with the ski pass at the PhotoPoint to film or photograph the ride.