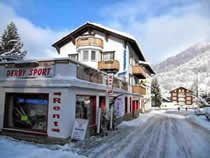 About the ski resort Saas-Almagell

Ski hire Saas Almagell online - Saas Almagell is a village which lies south of the Saas Valley. The family-friendly ski area Furggstalden-Heidbodme invites to relaxed skiing and snowboarding, far away from crowded slopes, stress and hectic. Saas Almagell and its surroundings invite their guests to relax and let their minds wander while enjoying wonderful snow conditions. Directly from the village one can reach the 14 km large ski area by chairlift. Kian’s Abenteuerland takes care of the youngest skiers, so they will have lots of fun during their stay and also learn to ski. Those little skiers who need a break from practicing, can enjoy themselves with snowtubing or face painting. Whatever the children choose, they will certainly not be bored. Freeriders will also be satisfied in the ski area of Saas Fee – Saas Valley. They can either book guided tours or choose one of the five off-piste descents in the free area independently. Freestylers and snowboarders will find in the park Morenia, among others, appropriate obstacles for their jumps and tricks. It should be mentioned that the Saas Valley can offer a total of three funparks for all levels of difficulty. On the Furggstalden in Saas Almagell a race track is located where time can be measured at the top, so one can continually assess its improvements.

Tip - Ski hire Saas Almagell
Using SNOWELL you can rent your skis and snowboards online in advance in Saas Almagell and save money at the same time. At the time of your arrival you can pick up your booked rental equipment directly at the co-operating ski hire shop directly in Saas Almagell. An extremely practical but also economical solution for your ski hire in Saas Almagell.