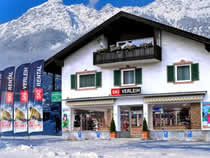 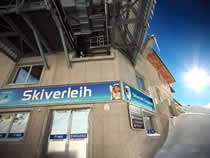 At the lift station [top], Next to restaurant

About the ski resort Garmisch-Partenkirchen

Ski hire Garmisch - Partenkirchen online - The district of Garmisch-Partenkirchen is located in the state of Bavaria in the district of Upper Bavaria, at the foot of the highest mountain in Germany, the 2,962 m Zugspitze. Garmisch-Partenkirchen is a popular destination in summer and winter for all those who appreciate and love the beautiful nature around the Zugspitze. Garmisch-Partenkirchen offers all passionate winter sports enthusiasts two different ski areas. This is on one side the ski area Garmisch-Classic, where the three well-known mountains Kreuzeck, Alpspitz and Hausberg are located. The rather flat slopes on the Hausberg are perfectly suited for ski beginners and snowboard beginners. The practice area has its own children's land, where one can practice the first turns with lots of fun and in a playful way. On the Kreuzberg you will find the more advanced winter sports enthusiast. Here you can also find the legendary Kandahar run. The seven kilometers long descent contains many difficult passages, such as e.g. the "Freien Fall - Free Fall" which is something for people with strong nerves with its 92% incline. Here one can also find the BMWxDrive Skimovie route and the public race track. Snowboarders and freestylers will find their challenge in the 4,000 m2 snow and fun park at the Hexenkessel. In the ski resort of Garmisch-Classic are numerous huts and mountain restaurants to take a break. On the other side, there is the second ski area of Garmisch-Partenkirchen, the Zugspitze. The ski area on the glacier has 20 kilometers of slopes and is open up to seven months per year, depending on the snow conditions. Besides many blue and red marked runs, the internationally renowned super-G downhill run offers a special treat for all athletic skiers. Explore the glacier world or spend an unforgettable night in the igloo village. In Garmisch-Partenkirchen there is also the possibility to try out other winter sports activities such as cross-country skiing, winter hiking, tobogganing, ice skating, curling and much more.