Hide map
The ski resort La Tania - Savoie - Savoy welcomes you! At the following ski hire shops in La Tania with SNOWELL, you can rent perfectly fitting and groomed skis, snowboards, freeride skis and everything else for the winter sports easily online. In La Tania an impressive mountain world awaits the skiers, snowboarders and freeriders! La Tania in Rhône-Alpes with its ski area Les 3 Vallées offers fantastic slopes and deep snow slopes for passionate winter sports enthusiasts of all ages. BOOK NOW and benefit from special advantages at our ski rental experts in La Tania. 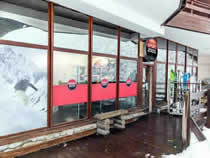 About the ski resort La Tania

Ski hire La Tania online - The car-free ski resort of La Tania is located between Méribel and Courchevel and has been specially built for the Winter Olympics in Albertville. La Tania is situated at an altitude of 1,400 m amidst majestic trees and the townscape is characterized by pretty wooden cabins, which exudes much warmth and comfort. La Tania is very family-friendly and thus has a lot to offer for the little skiers and snowboarders. On the Troika slopes for example, the little ones can make their first attempts in the snow. There is also a toboggan run here and enough space to build snowmen and slide down the slopes. Children from the age of 3 are well-cared for in the kindergarten, while the parents can make their turns on the perfectly groomed slops. La Tania belongs to the largest ski association of the world, Les 3 Vallées. A total of 600 kilometers of slopes can be explored from La Tania, which lets the hearts of all skiers, snowboarder and freeriders beat faster. La Tania is also part of the ski resort of Courchevel, which offers all winter sports fans 150 kilometers of slopes and top modern lifts. Unlike the other resorts of Les 3 Vallées La Tania offers an excellent and fair price/performance ratio. Other activities such as snowshoeing, aquarobics, dogsled races, torchlight hikes, to name just a few of the long list, will delight young and old also off the pistes.

Tip - ski hire La Tania
Using SNOWELL you can rent your skis and snowboards online in advance in La Tania and save money at the same time. At the time of your arrival you can pick up your booked rental equipment directly at the co-operating ski hire shop directly in La Tania. An extremely practical but also economical solution for your ski hire in La Tania.