Hide map
Rent the perfect ski and snowboard equipment in Samoëns 1600 in Rhône-Alpes with SNOWELL easy and comfortable from home. Just choose the preferred ski hire shop in Samoëns 1600 from the list below with BOOK NOW, enter the rental period, choose the winter sports equipment and off you go to the slopes of the ski area Le Grand Massif. Skiing, snowboarding, cross country skiing, deep snow slopes for freeriders, and much more … In Samoëns 1600 - Haute Savoie – Upper Savoy you will find a varied program for you winter holiday! 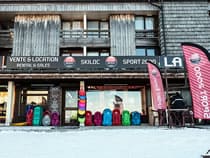 At the lift station [bottom], Directly located in ski area

About the ski resort Samoëns 1600

Ski hire Samoëns 1600 online - Samoëns 1600 is located in the French Haute Savoie amidst the Haut-Giffre. Situated beneath the majestic Criou, the ski resort Samoëns 1600 belongs to the monumental mountain village of Samoëns. In contrast to the traditional and historic Samoëns, which is mainly composed of small stone houses and huts, Samoëns 1600 offers a modern infrastructure with hotels and apartment complexes, which are located directly at the ski lifts. The ski fun starts thus directly at your doorstep and after a successful day of skiing one can easily ski or snowboard back to the accommodation on skis or on a snowboard. In addition to a fitness center, an indoor tennis court and an indoor pool, Samoëns also has a small but nice ski area. On the mainly blue and red marked slopes newcomers, but also athletic skiers and snowboarders will find their challenge. There are also four black slopes in Samoëns. The most famous and most feared of them all is the “Aigle Noir”. 16 lifts transport you comfortably to the different parts of the ski area. For the little ones there is a children’s park, where they can make the first attempts on skis or snowboard. There is also a small snowpark with a slalom course and freestyle elements in the small snowpark. Those who think this is not enough, can use the 265 kilometers of slopes of “Les Grand Massif” with the appropriate ski pass. The well-known ski area exists of the five ski resorts Flaine, Samoëns, Les Carroz, Sixt Fer-à-Cheval and Morillon and leave nothing to be desired for all enthusiastic skiers, snowboarders, freestylers and freeriders.

Tip - ski hire Samoëns 1600
Using SNOWELL you can rent your skis and snowboards online in advance in Samoëns 1600 and save money at the same time. At the time of your arrival you can pick up your booked rental equipment directly at the co-operating ski hire shop directly in Samoëns 1600. An extremely practical but also economical solution for your ski hire in Samoëns 1600.