Hide map
SNOWELL and its ski rental shops in Morzine in Rhône-Alpes welcome you in the winter sports resort Morzine - Haute Savoie – Upper Savoy. The ski area Portes du Soleil offers varied slopes and excellent conditions for your skiing holiday in France. With SNOWELL, at our ski rental stations in Morzine you can hire the latest and perfectly groomed skis online. With BOOK NOW choose the preferred sports shop in Morzine, choose the rental period and skis, snowboards, etc. and you are ready for the slopes! 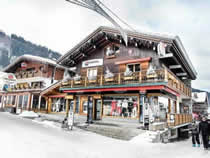 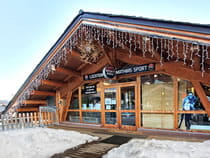 About the ski resort Morzine

Ski hire Morzine online - The French mountain village Morzine is located at 1,000 m in the region Haut-Chablais. The traditional village puts much emphasis on being in harmony with nature and thus belongs to the club of the “Alpine Pearls”. The townscape of Morzine, which is located south of Lake Geneva, is dominated by typical regional wooden chalets, which gives the village a warm and authentic character. Various shops, restaurants, accommodations, bars and discos invite you to shop and linger. Every year in late March the far and wide known Rock the Pistes Festival takes place here. Stop by, you will be thrilled! From the center of Morzine you can reach Avoriaz by cable car in a few minutes. The ski resort of Morzine is located on a high plateau and comprises a total of 22 ski lifts and 38 runs. The majority of the slopes are marked blue for beginners and red for advanced skiers and snowboarders. Since Morzine is situated in the middle of the ski area of Les Portes du Soleil, you will have access to 650 kilometers of slopes and 198 lifts with the appropriate ski pass. Away from the slopes other winter sports activities such as snowshoeing, a flight with a hot air ballon, heli-skiing, paragliding, ice skating or tobogganing are offered in Morzine. In the region around Morzine also cross-country skiers are not forgotten. 45 kilometers of trails lead through the magnificent countryside at an altitude between 1,500 m and 1,800 m.

Tip - ski hire Morzine
Using SNOWELL you can rent your skis and snowboards online in advance in Morzine and save money at the same time. At the time of your arrival you can pick up your booked rental equipment directly at the co-operating ski hire shop directly in Morzine. An extremely practical but also economical solution for your ski hire in Morzine.