Hide map
Ski holiday and ski hire in Allos with SNOWELL. The latest and top tuned models of skis you can rent in Allos in Provence-Alpes-Côte d’Azur easily and comfortably online from your house and then start relaxed with your winter sports vacation in Allos - Alpes de Haute Provence. But also the latest trends in snowboarding, freeriding and other winter sports you can rent online at our ski rental stations in Allos in France - always centrally located and close to the ski resort Espace Lumière. 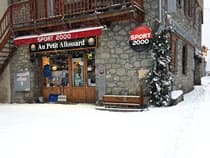 About the ski resort Allos

Ski hire Allos online - The municipality of Allos is divided into two villages, the modern Allos 1800 and the more traditional village Allos. In the village of Allos one will find nice shops, good restaurants and several grocery stores. Not far from the village is the mountain pass Col d’Allos, which has demanded a lot of the riders of the Tour de France already several times. From the village one can easily reach the ski resort of Val d’Allos by ski bus. The ski area of Val d’Allos includes Pra Loup. Val d’Allos is composed of two sub-regions, namely Val d’Allos-La Foux and Val d’Allos-Le Seignus. In total 230 km of top-groomed slopes connect the ski areas Val d’Allos La Foux/Pra Loup and Val d’Allos-Le Seignus. Val d’Allos-la Foux is especially popular among families. With 180 km of slopes, 18 modern lifts and mainly blue and red marked slopes, the ski area offers ski fun for beginners as well as advanced skiers. Snowboarders and freestylers will find their challenge in the snowpark. The ski area, which has been awarded with the “Famille Plus Montagne” has a wide range of activities for the whole family. Val d’Allos-Le Seignus is a smaller but still very nice ski area and offers fun on the slopes in all levels of difficulty on about 50 km of top-groomed pistes.

Tip - ski hire Allos
Using SNOWELL you can rent your skis and snowboards online in advance in Allos and save money at the same time. At the time of your arrival you can pick up your booked rental equipment directly at the co-operating ski hire shop directly in Allos. An extremely practical but also economical solution for your ski hire in Allos.