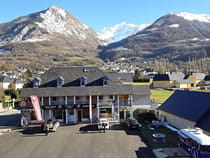 About the ski resort Luz-Saint-Sauveur

Ski hire Luz-Saint-Sauveur - Just 30km from the world-famous town of Lourdes, Luz-Saint-Saveur is located 677m above sea level in the heart of the Pyrénées National Park. Luz-Saint-Saveur is a village with about 1,000 inhabitants, which has retained its typical and charming character and is located on the upper reaches of the Gave du Pau. Nestled in this picturesque setting, the surrounding 3 ski areas of Grand Tourmalet / Pic du Midi - La Mongie / Barèges, with 100km of ski slopes and 32 cable cars and lifts, Luz Ardiden with 30km of slopes and 10 lifts and Gavarnie / Gedre - Les Espécières with 33km of slopes and 9 lifts are easily accessible. The ski resort Grand Tourmalet extends up to 2,500m above sea level. A highlight is the observatory on the Pic du Midi de Bigorre, which is located at 2,877m above sea level. From here one has a sensational view over the mountainous landscape of the Hautes Pyrénées. Grand Tourmalet also respresents a true paradise for freeriders and ski tourers. For freestylers and snowboarders, the ski resorts in the area offer attractive and varied snow parks. If you wish, you can explore the beautiful landscape around Luz-Saint-Saveur with snowshoes, on numerous winter hiking trails and also from the air with a paraglider. Worth seeing are also the castle ruin Sainte-Marie, the chapel Solférino and the Pont Napoleon (Napoleon Bridge), from which you can bungee jump. The Luzéa spa in Luz-Saint-Sauveur, including a jacuzzi, sauna, swimming pool, hammam and numerous wellness treatments, offers a relaxing alternative to the many activities. The two mountain passes such as the Col du Tourmalet, which is the highest pass in the French Pyrenees, and the over 13km long serpentine road from Luz-Saint-Sauveur to Luz Ardiden are traditional mountain stages in the Tour de France and the Vuelta.