Hide map
The ski resort Oetz - Ötztal welcomes you! At the following ski hire shops in Oetz with SNOWELL, you can rent perfectly fitting and groomed skis, snowboards, freeride skis and everything else for the winter sports easily online. In Oetz an impressive mountain world awaits the skiers, snowboarders and freeriders! Oetz in Tyrol with its ski area Oetz-Hochötz offers fantastic slopes and deep snow slopes for passionate winter sports enthusiasts of all ages. BOOK NOW and benefit from special advantages at our ski rental experts in Oetz. 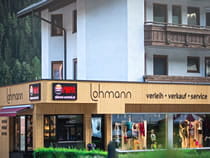 About the ski resort Oetz

Ski hire Oetz online - Oetz is the first ski resort in de Ötztal and is located at an altitude of 820 m above sea level. The ski area has expanded from Hochoetz to Kühtai – Hochoetz. Starting from a 2-day ski pass you can use the now expanded ski area. In numbers it is as follows: in total 80 km of piste fun with 24 modern lifts and cable cars in the region around Oetz are available. If you only use the Hochoetz ski area, which lies between 1,400 m and 2,300 m above sea level, then 34 km of pistes with 8 modern lifts and cable cars and 4 tow lifts prove their service. It is a typical family area. It is divided into 12 km of blue runs, 21 km of red runs and 3 km of challenging black runs. In addition, there is a permanent race track, which invites to steady practice and for a competition, so you want to go faster and faster. The freeriders can let off steam on the 3 km unprepared deep snow descents. The mascot WIDI creates a good atmosphere with the little racers. With great enthusiasm, the children learn to make their first turns and are happy when they succeed and can really get going. Every Wednesday a children’s theatre performance is announced. Besides skiing, cross-country skiing is also possible in this beautiful region of the Ötztal valley or you can spend your time at winter hiking. In Oetz it is also possible to do ice skating or tobogganing. Near Oetz the Aqua Dome is highly recommended, which is ideal for a relaxing day away from the slopes.

Tip - ski hire Oetz
Using SNOWELL you can rent your skis and snowboards online in advance in Oetz and save money at the same time. At the time of your arrival you can pick up your booked rental equipment directly at the co-operating ski hire shop directly in Oetz. An extremely practical but also economical solution for your ski hire in Oetz.